Sean Lowe did some big time bonding on the hometown dates and part of it was with Catherine Giduci’s grandma. In a deleted scene from “The Bachelor” 2013, fans get to see Sean getting to know grandma more.

In this clip, Grandma teases that she is going to steal him, but Grandma even puts Sean’s arm around her. She says that she likes him as Catherine teases that he is hers. She even whispers in his ear and teases him to go to her house.

It looks like Sean Lowe and grandma get along well! 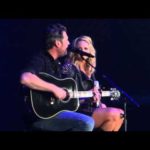