This year Scarlett Johansson did an ad for SodaStream that Fox has decided they will not air. It looks like they are just afraid of Pepsi and Coke so they are trying to keep from causing problems with the big companies.

I personally think it is a cute idea for a commercial. Scarlett talks about how she loves the SodaStream and that is is better for the world and everyone who uses it. She then decides she has to find a way to make it go viral and of course as everyone knows sex sells. At the end she says, “Sorry Cooke and Pepsi.”

Now this ad won’t air during the Super Bowl 2014 at all. Fox decided to deny it and really with no good reason. I love it and I say let everyone see it! What do you think of Scarlett Johansson’s sexy Super Bowl ad? Let me know in the comments what your thoughts are on this one and check it out below. 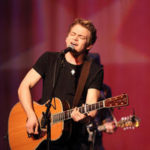