It was the fight heard around the world. When “American Idol” was filming, everyone heard about the big fight between Nicki Minaj and Mariah Carey. It aired on the show tonight and everyone saw Nicki storm off.

I personally didn’t think it was as big of a deal as they made it out to be. I was expecting to hear her screaming and yelling, but it was pretty tame. Nicki did say: “Maybe I should just get off the f**king panel… I’m over it.”

What did you think of it? Sound off in the comments. 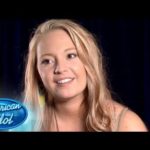 Janelle Arther on the Road to ‘American Idol’