“Revenge” season 2 is coming to an end. On May 12, it will have a huge two hour finale that fans are ready for after seeing a big shocker last night. A new preview is out for the finale and it shows that this finale is full of drama that you will not want to miss.

This preview makes it look like Emily might finally admit that she is Amanda. It is not certain though. I have been expecting her secret to come out for a while now, but obviously that will change everything when it happens. There is also going to be a big death in this finale. The preview hints at a few different people that it could end up being that die.

Are you ready for the “Revenge” season 2 finale? This is going to be two hours so make sure you watch the preview below. Sound off in the comments on who you think is going to end up dying. 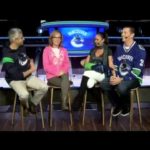 Watch Zendaya and Val Salsa to a Perfect Score